The following information provides guidance to selected parties who need to consult with American Indian tribes. While the Texas Historical Commission provides these guidelines to help facilitate consultations, responsibility for consultation rests on federal, state, and local government agencies, as well as other organizations with consultation requirements.

If a project involves federal funds, permits, licenses, or lands and it has a potential effect on Native American historic or cultural resources, you may be required to conduct consultation with Indian tribes as stipulated in Section 106 of the National Historic Preservation Act (U.S. Code 16, §470, et seq.).

There are a number of ways that Section 106 regulations could apply during the course of a project. As a rule of thumb, plan Section 106 compliance activities any time there is federal involvement.

Consultation may be necessary if the project encounters, alters, or has an adverse effect on Native American historical and cultural resources, which include, but are not limited to, human remains, funerary objects, historic structures, sacred sites, and traditional cultural properties. Here are a few example projects where consultation may be necessary under Section 106:

More information about the Section 106 process can be found on the Advisory Council on Historic Preservation website.

What to Do if You Encounter Human Remains 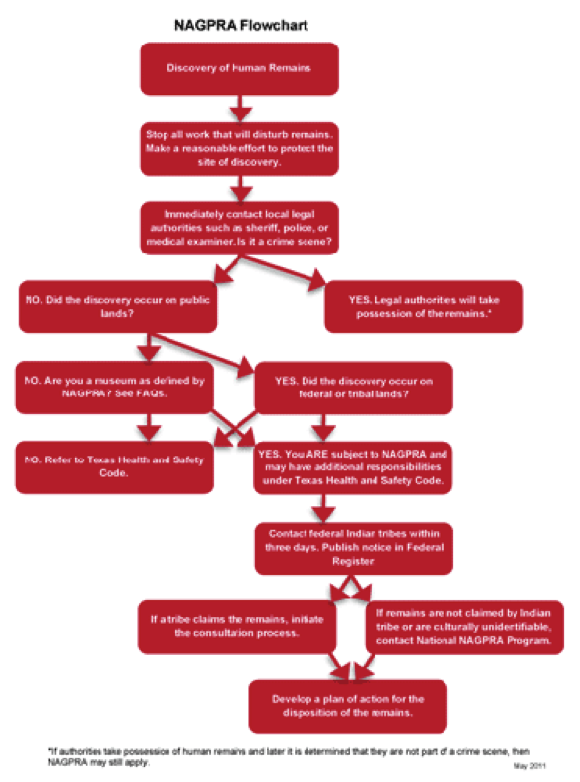 If authorities take possession of human remains and later it is determined that they are not part of a crime scene, then NAGPRA may still apply.

Discovery of human remains may be subject to the jurisdiction of the Texas Health and Safety Code (Title 8, Chapters 711–714). Though consultation with Indian tribes is not legally required under the Health and Safety Code, the Texas Historical Commission (THC) encourages consultation in the event of intentional or inadvertent discoveries of human remains and funerary objects to ensure that these items are dealt with properly and respectfully.

What to Do if You Encounter Human Remains 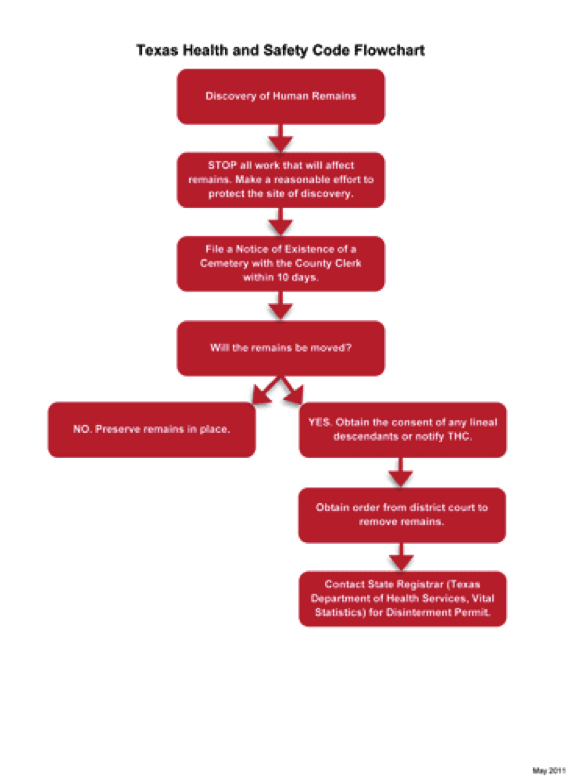 For more information on reporting unknown or abandoned cemeteries, see Notice of Existence of Cemetery on the THC website.

Consultation is grounded in the government-to-government relationship established by the U.S. Constitution, treaties, statutes, case law, and policy. The federal government has a trust responsibility to protect tribal sovereignty, self-determination, assets and resources, and treaty and other reserved rights. Executive orders published by current and past presidents reaffirm this responsibility and the need for consultation at the government-to-government level.

The National Historic Preservation Act (NHPA) is the predominant preservation legislation in the United States. Section 106 of the NHPA directs federal agencies and recipients of federal funds, permits, and licenses as well as those working on federal lands to take into account the effects of an undertaking on historic properties. The implementing regulations of Section 106 can be found in Title 36, Part 800 of the Code of Federal Regulations.

The National Environmental Policy Act (NEPA) requires federal agencies to assess the effects of their proposed actions on the natural and physical environment. Specifically, for major federal actions that have a significant effect on the quality of the human environment, NEPA directs agencies to produce Environmental Impact Statements and provide detailed explanations regarding any adverse effects, possible alternatives to the proposed action, the relationship between the short-term use of an area and its long-term maintenance and productivity, and any irreversible or irretrievable commitments on resources.

The Indian Self Determination and Education Assistance Act (ISDEAA) gives tribes the opportunity to plan, conduct, and administer certain federal programs and services for their communities. These include health care, education, housing, infrastructure, and government administration. The ISDEAA allows tribes to enter into contracts with the U.S. Secretary of the Interior regarding the management of these programs and makes grants available to tribes to facilitate these programs and services.

The American Indian Religious Freedom Act (AIRFA) protects and preserves the traditional religions and belief systems of American Indians. AIRFA directs federal agencies to work with Indian tribes on policy and procedures to achieve this goal. AIRFA provisions cover access to sacred sites, the use and possession of sacred objects, and the freedom of American Indians to practice traditional ceremonies and rites.

The Native American Graves Protection and Repatriation Act (NAGPRA) defines a process for the return of Native American human remains and cultural items such as funerary and sacred objects and objects of cultural patrimony that are in the possession of museums and other institutions. NAGPRA also specifies provisions for the discovery of Native American human remains and cultural items on federal and tribal lands and establishes penalties for non-compliance and trafficking of these items. All public and private museums and institutions that receive federal funding must comply with NAGPRA.

President Clinton's 1994 memorandum on government-to-government consultation outlines principles that executive departments and agencies must follow in their interactions with Native American tribal governments.

The court, in Pueblo of Sandia v. United States, found that federal agency officials did not make a "reasonable and good faith effort" to identify and evaluate the effects of an undertaking on traditional cultural properties. This ruling set a precedent for the use of "reasonable" and "good faith" as criterions to evaluate an agency's level of effort.

Executive Order No. 13007 requires federal agencies to consult with Indian tribes concerning the access, use, and protection of sacred sites.

Executive Order No. 13175, Consultation and Coordination With Indian Tribal Governments (2000)

Executive Order No. 13175 directs federal agencies to develop an "accountable process" of conducting consultation with Indian tribes that respects Indian tribal self-government and sovereignty, honors tribal treaty and other rights, and strives to meet the responsibilities that arise from the unique legal relationship between the federal government and Indian tribal governments.

President Obama's 2009 Memorandum on Tribal Consultation directs agency officials to provide detailed plans of action regarding the implementation of directives in Executive Order No. 13175.

Antiquities Code of Texas (1969), as amended

The Antiquities Code is the governing body of regulations relating to the protection and preservation of all sites, objects, buildings, shipwrecks, and locations of historical, archeological, educational, or scientific interest within the jurisdiction of the State of Texas. It requires state agencies and political subdivisions of the state, including, but not limited to, cities, counties, river authorities, municipal utility districts, and school districts, to notify the Texas Historical Commission (THC) of any action on public land that has the potential to disturb recorded historic or archeological sites. The THC issues antiquities permits that authorize archeological studies and work proposed at designated locations.

Section 711 of the Texas Health and Safety Code lists definitions and regulations regarding the establishment, maintenance, and disturbance of cemeteries, human remains, and funerary objects on public and private lands within the State of Texas. In 2009, amendments to the Texas Health and Safety Code clarified that legal protection extended to interments of any age or cultural affiliation.