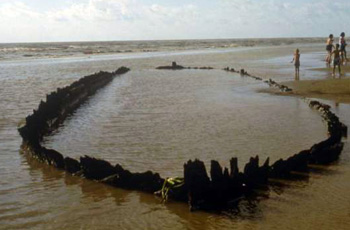 The State Marine Archeologist is responsible for the protection, preservation, and investigation of historic shipwrecks in all state-owned waters of Texas.

Between the arrival of the earliest European explorers and the beginning of the 20th century, thousands of ships were wrecked along Texas shores. Ranging from sailing ships to steamboats, wooden hulls to steel, these vessels carried the vital goods of commerce between small communities, provided transportation for passengers, and performed the yeoman tasks of workboats everywhere.

Some wrecks, such as the La Belle, are significant because the vessels played prominent roles in our history, others because they represent types of vessels that have disappeared from our waters.

The State Marine Archeologist maintains an ever increasing inventory of these wrecks, investigates known wrecks, and reviews development projects in state waters for possible impact to historic shipwrecks.

Staff members also conduct cultural resource management reviews for projects that might impact shipwrecks on state-owned submerged lands. For more updates and news focusing on Marine Archeology please visit our Blog to stay up to date.

With the vital assistance from several volunteer organizations, the THC conducts various projects around the state. Three recent ongoing projects are described here.

The Threshold of Texas project involves the investigation of numerous historic shipwrecks reported in and around Matagorda Bay, as well as the historic port of Indianola. The records of the State Marine Archeologist indicate that more than 30 vessels were lost in this vicinity. A study completed in 2000 at the entrance to Matagorda Bay, conducted by a nonprofit research group, located the remains of 19 ships, including one that may date to the period of the Texas Republic and one that dates to the early 1800s. Marine remote-sensing investigations and THC dive investigations in 2007 located the historic wharves at the important nineteenth-century port of Indianola and remains of a shipwreck believed to be the steamship Perseverance. Perseverance was a Charles Morgan steamer that caught fire at Indianola and sank in 1856 after taking on a cargo of cotton and hides.

In addition, the THC is still seeking the location of L'Aimable, the missing supply ship from the colonizing voyage of La Salle. The THC will concentrate on investigating the wrecks in this area to better understand the seafaring history of this region and, through that history, the broader impact on the economic and social development of Matagorda and Calhoun counties.

Near the end of World War I, the United States undertook an emergency program of wooden ship construction to bolster the badly depleted merchant fleets carrying vital war cargos. The steamships produced during this period were some of the largest wooden ships ever built. Numerous shipyards around the country took part in this program, including yards in Orange, Beaumont, and Rockport. Hundreds of vessels were constructed but few ever saw service, as the war ended before they were launched. Many of the unfinished hulls were abandoned in the Neches and Sabine rivers. The THC is investigating the hulks of several of these vessels to determine their state of preservation and historic significance.

Galveston, as one of Texas’ oldest ports, has experienced its share of tragedies. These included not only the devastation wrought by hurricanes, such as those in 1900 and 1915, but also shipping losses caused by storms, mechanical malfunction, and fire. One of the ports well-known maritime disasters occurred in 1875 with the sinking of the Mallory Line steamship City of Waco. The 242-ft steamer was anchored off of Galveston riding out a storm when it inexplicably caught fire and sank. Though other vessels were nearby, the storm conditions prevented any aid to the vessel and all fifty-six on board were lost. This is the largest loss of life for any historic vessel lost in Texas state waters. The wreck was dynamited in 1900 to remove it as a hazard.

The wreckage of City of Waco was previously known, but in modern times had been misidentified as the 35-year-old dredge Galveston that sank in 1943. Marine remote-sensing survey of the wreck in 2003 helped re-identify the remains as City of Waco and diving at the site by the THC and the marine stewards in 2004 and 2005 confirmed this new identification. Additional survey was conducted at the site in 2012 through a partnership between the THC and the National Oceanic and Atmospheric Administration’s (NOAA) Office of National Marine Sanctuaries and Office of Coast Survey. NOAA survey data demonstrates that the wreck appears to be unchanged since 2003 but has become more exposed by storm activity during the last decade. Additional investigations of this significant wreck are anticipated in the future.