By Kirby McLeod, Intern at the Sam Rayburn House 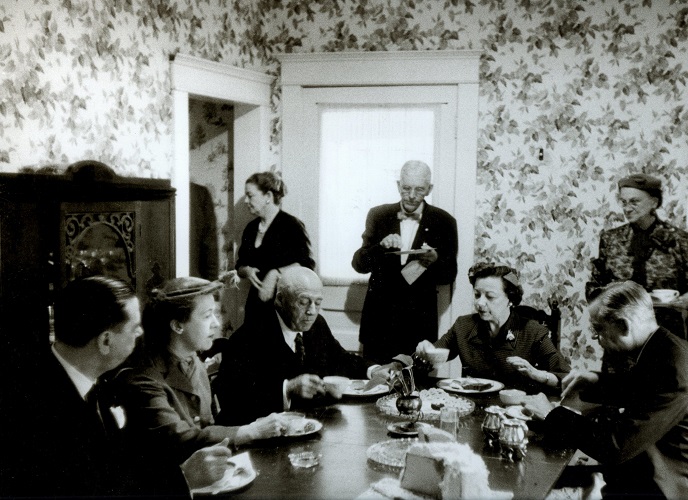 Biographers D.B. Hardeman and Donald Bacon recall a meeting with Sam “Mr. Sam” Rayburn in December of 1956. On the day in question, the biographers note the lunch prepared by Medibel Bartley and Martha Rayburn Thomas (longtime cook Bobbie Erskine Phillips had passed away earlier in the year) consisted of fried pork shoulder, pork sausage, buttered hominy, asparagus, grapefruit salad, applesauce, hot biscuits, apple pie, and coffee. Coffee, in particular, is something of a repeating motif when it comes to the Rayburn family.

It is mentioned often enough in books and interviews, but usually remains firmly in the background. For instance, during my orientation as an intern at the Sam Rayburn House the strangely large number of coffee pots was noted and quickly dismissed.

Coffee, it would seem, was a frequent sight at Rayburn meals, for just as Mr. Sam’s biographers recall a midday drink, so too did foreman Buck Henson remember often sharing a morning cup of joe with the whole Rayburn family before work began on the farm. Hardeman also worked on staff with Sam Rayburn while he was in Washington, and every Sunday the two met at Mr. Sam’s D.C. apartment and discussed notable news over breakfast and another cup of coffee.

From the oral history interviews in our collections, it becomes evident that coffee consistently serves as a humanizing, shared experience between ordinary folks and the great statesman— a common ground, if you will.

Moving on to the coffee artifacts on display at the Sam Rayburn House State Historic Site: they are quite plentiful. The most direct evidence of the Rayburn caffeine kick is the number of, and the wear on, the coffee pots. If you visit you will find four coffee pots or percolators on display, spread across the kitchen, breakfast room, and pantry. Keeping in mind the house probably had a maximum of five Rayburns in it at any time, there are many more pots and percolators than the family probably needed at any point.

Two of the percolators come from the same company—Landers, Frary & Clark. Both are labeled “Universal,” a brand name that Landers, Frary & Clark used. The Rayburns could also have ground the raw coffee beans themselves, as they owned a hand-cranked Charles Parker Co. Meriden, CT, no. 70 pepper grinder.

The “70” refers to the hopper size (no. 70 was the was the largest model sold at the time). Apparently, the model owned by the Rayburn family was quite rare, signified by the gold medallion on the front of the hopper.

What I found interesting was that the Rayburns had no cups that we would immediately call coffee mugs. It was later pointed out to me that they likely used the multitude of demitasse that accompanied their many fine china sets.

Additionally, it may be possible to infer things about how the Rayburns took their coffee by way of the large number of sugar and creamer dishes. If they took their coffee with anything in particular, it was likely just a modest mixture of those two ingredients or perhaps with honey, as an oral history interviewee recalled. It would also seem that some of the Rayburns had a fairly high standard for their coffee.

Robert Bartley remembered Dr. Frank Rayburn and his stepson George Atkins refusing to use the well water on the property to make their coffee, preferring to bring water in from town for brewing their drinks— a slightly odd thing to do for an otherwise very humble and down-to-earth family.

Archeology work has been done on the property, and going through the reports yields some interestingly relevant findings. In one of the dig locations, an archeologist found a number of coffee cans, one of which was the Maxwell House Coffee brand.

Based on the location of the dig on the property and the details of other artifacts found, the archeology report attributes the contents of that location to the Caretaker’s Cottage in about the time period that Bobbie and Charlie Phillips worked here—roughly the 1940s.

This whole exploration of coffee and the Rayburns branched out of my curiosity about how Mr. Sam took his coffee. As I investigated that question, I found no details about what, if anything, was added to the coffee he would have drunk. I had given up hope of finding direct reference to it at this point. Then I read the oral history interview with Edna Fewell Mengers.

A secretary to Mr. Sam, Edna spoke of how Mr. Sam once boiled her a pot of coffee and shared the remark, “This is the only way to make coffee—like the cowboys make it.” This is a bit surprising, as three of the four coffee pots in the home are percolators, used to brew coffee in a slightly different way from simply boiling it. So, the next time you boil your coffee—think of Mr. Sam.