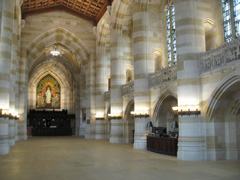 As a project contract historian for San Felipe de Austin State Historic Site, I recently spent a week at Yale University in New Haven, Connecticut, researching San Felipe resources in their archival collections. Surprisingly, some of the best early Texas history archives outside of Texas are in the Western Americana collections of Yale University’s Beinecke Library. Yale’s prominence as an archival home for Texana can be traced to two East Coast collectors and bibliographers.

Henry Raup Wagner graduated from Yale Law School in 1886. His professional life, however, shifted from law to mining, which brought him to Mexico and the American Southwest. He developed a passion for collecting books and manuscripts about American westward expansion and the Spanish borderlands, and published a bibliography on western topics. Wagner died in 1957. Yale’s Beinecke Library has some of his collections related to Texas and Mexico, with a particular focus on land grants during the Mexican era of Texas history. 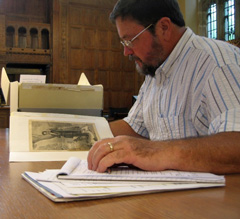 Thomas W. Streeter graduated from Harvard Law School rather than Yale, but like Wagner also veered from law to business. His chairmanship of an oil company in the 1920s brought him frequently to Texas, and ignited a passion for collecting Texas history items. Streeter retired to his New Jersey home in 1939 to devote himself full-time to collecting books and manuscripts, amassing the largest private Texana collection ever assembled.

Not just content to collect private treasures, Streeter researched his holdings to understand them better, and ultimately shared his expertise in the five-volume Bibliography of Texas, 1795-1845, published between 1955 and 1960. His bibliography remains the authoritative work in the field. 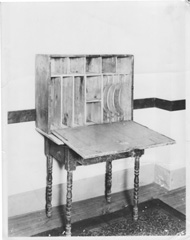 Streeter donated a collection of Stephen F. Austin family papers to the University of Texas in 1944, but felt that the Texas libraries had not expressed sufficient interest in his other collections, and so he sold them to Yale University in the 1950s. In addition to extensive manuscript documents, Streeter’s collection includes many hundreds of printed documents that came off the two printing presses at San Felipe, including almost all of the surviving copies of the Texas Gazette and Mexican Citizen newspapers.

When Streeter acquired his collection of Austin papers from Beauregard Bryan, he also acquired a desk that had belonged to Stephen F. Austin. Although Streeter donated the Austin papers to the University of Texas in 1944, he kept the desk for some years until donating it in 1960 to the Stephen F. Austin Park Association (now the Friends of the San Felipe de Austin State Historic Site).

The desk was recently conserved and is currently on exhibit at the Bullock Texas State History Museum in Austin until a new visitors center at San Felipe is constructed, where it will serve as a centerpiece. 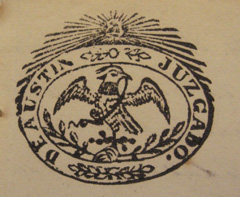 Anticipating needs for the upcoming visitors center, I also identified and requested digital scans of documents that would be important to the exhibits in the new visitors center. The Friends of the San Felipe de Austin State Historic Site generously appropriated several thousand dollars in scanning fees to stockpile digital images from Yale, in support of the exhibit design process. When those exhibits open, they will include extensive use of digital images from documents actually printed in San Felipe’s printing shops by Godwin Cotten, R. M. Williamson, and Gail Borden.

In 1831, Stephen F. Austin sent the seal of the juzgado (court) of Austin to San Felipe from Mexico. I had previously discovered documents stamped with this seal in colonial records in Texas. 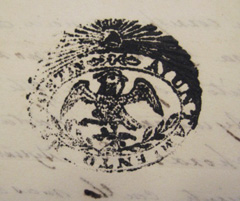 Research also indicated that Austin sent another seal for the ayuntamiento (town council) of San Felipe at the same time, but I had not found any examples of documents with that stamp. In the Wagner Collection, however, I found a couple of documents that were stamped with the seal of the council on a report of the ayuntamiento to the political chief in Bexar in 1834.

The reports that bear the ayuntamiento stamp were written by the council’s secretary, William Barret Travis, who must have also been the custodian of the council’s seal.

Because the Streeter and Wagner collections are so far from Texas, they have not been as extensively utilized in exhibits as the resources from archives in the state. The particular strength of these Yale collections on the documents written and printed in San Felipe de Austin are proving very critical to the understanding of the town’s history, and will be key features in the exhibits and programs of the new visitors center to be built at San Felipe de Austin State Historic Site.

I am a descendant of Jose Luciano Navarro, brother of better known Jose Antonio Navarro.

Great Blog Post! For my birthday, I am attending the Grand Opening of the Museum! I am a descendant of Anton Pieper, Peter Pieper's son. Perhaps I need to go to Yale to see if there is any info. on the Piepers. This reminds me of how most of Ferdinand Lindheimer's collections are elsewhere as well. I have been to see some of his botanical specimens at the University of Texas Herbarium.