At the turn of the 20th century, the country gradually transformed out of the Age of Iron, and into the Age of Concrete. Around the late 19th century, the United States started using reinforced concrete, in which steel reinforcement bars are embedded into concrete slabs to improve durability and strength. Europe began experimenting with reinforced concrete in the 1840s, yet American engineers only started favoring the material at a time when population increases and technological demands met with certain aesthetic trends.

One significant development aimed at adapting to the population increase and industrial expansion came from the City Beautiful Movement of the early 20th century. Following the Chicago World’s Columbian Exposition in 1893, which showcased new and impressive structures of Neoclassical and Beaux Arts architecture, the nation sought ornamentation and elaborate patterns for their buildings and structures. 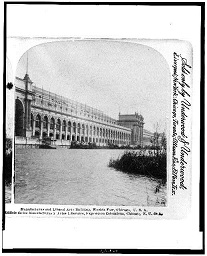 The 1892 Manufacturers and Liberal Arts Exhibition Building constructed for the Chicago World's Columbian Expostion, at left, displays the stone masonry and Classical Revival styles common at the time. The famous World's Columbian Exposition, later called the Chicago World's Fair, initiated the City Beautiful Movement with ornate buildings specifically designed for the fair. It created architectural trends that eventually spread throughout the nation in all manners and forms.

With the increasing popularity of the camera, designers had the ability to research, publicize, and copy specific styles from across the globe. Following the First World War, American soldiers returned home with images of traditional French and Spanish architecture. In response, American architecture imitated the decorative and picturesque ornamentation found on European facades. Engineers followed these national trends in aesthetic design, focusing on general appeal and embellishment. These Revivial styles are seen throughout Texas in the neighborhoods from that era, but also in the infrastructure, such as at the Commerce Street and Pleasanton Road bridges in San Antonio.