Cultural landscapes recognize that historically significant resources may include more than distinct buildings, and that there may even be an absence of buildings. Cultural landscapes can range in size from thousands of acres to a small yard, but all have in common humankind’s imprint on the natural landscape.

A cultural landscape is defined by the National Park Service as a geographic area (including both cultural and natural resources and the wildlife or domestic animals therein), associated with a historic event, activity, or person or exhibiting other cultural or aesthetic values. Cultural landscapes are composed of a collection of character-defining features, which may include small-scale features like statuary and benches, as well as large patterns of fields, forests, and other features that demarcate the land. Character-defining features are generally organized as topography; vegetation; circulation; water features, and; structures, site furnishings, and objects.

A historic designed landscape is a landscape that was consciously designed or laid out by a landscape architect, master gardener, architect, or horticulturist according to design principles, or an amateur gardener working in a recognized style or tradition. 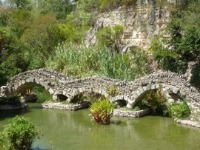 Situated inside an abandoned quarry associated with the Alamo Portland and Roman Cement Company, this sunken garden was designed by San Antonio Park Commissioner Ray Lambert in 1917 and constructed with prisoner labor. It is comprised of winding pathways through luscious plantings, around limestone walls, and over a limestone bridge spanning a pond. Combined with the adjacent limestone pagoda and residence, the garden gives the visitor a feeling of discovery and serenity. 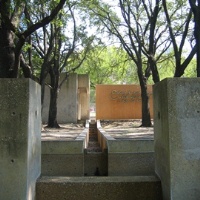 Designed by notable landscape architect Lawrence Halprin, this modernist landscape is comprised of concrete forms and water features organized into outdoor “rooms.” Water flows from its highest point through a series of walls, troughs, and falls. Heritage Park Plaza is located in downtown Fort Worth along the Trinity River, and has an overlook cantilevered over Trinity Bluff. The plaza references the historic Camp Worth military post in its design and was built to celebrate the 1976 U.S. Bicentennial.

A historic vernacular landscape is a landscape that evolved through use by the people whose activities or occupancy shaped that landscape.

Richard King began ranching in 1852 with the purchase of a Spanish land grant on San Gertrudis Creek. There he hybridized the Mexican hacienda and southern plantation systems, and his descendants developed the Santa Gertrudis cattle breed. Although the ranch boundaries have expanded to over a million acres, and methods of operation have changed, the ranching use and sustainable natural resources management practices continue to shape the landscape in much the same way as they did during King’s tenure.

This rural district spanning 2900 acres was settled by Norwegians in the early 1840s and became Texas' largest Norse settlement. It likely appealed to its Norwegian settlers because its woods, hills, and steep, sloping streams resembled parts of their home country. This combination of middle to late 19th century Norwegian farmsteads, historic buildings, and gentle rolling hills along the south side of the upper Meridian Creek valley retains much of its historic use, character, and integrity.

A historic site is a landscape significant for its association with a historic event, activity, or person. 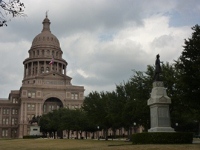 In 1840, Austin became the capital of Texas and its Capitol Square was platted on one of the city’s highest points near the center of town. Architect Elijah E. Myers designed the current building to replace the first capitol, which burned in 1881. The Renaissance Revival style building was completed in 1888 with “sunset red” granite quarried 50 miles from the site. The capitol has a park-like setting with mature trees, native plantings, wide lawns, concrete pathways, a circular drive, and commemorative monuments. 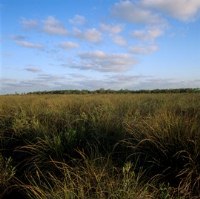 This low-laying coastal prairie saw the first battle of the U.S.-Mexican War on May 8, 1846. Mexican General Mariano Arista led his men into the field and tried to block the U.S. advance led by General Zachary Taylor. Heavy Mexican casualties, due in large part to the U.S.’s use of 18-pound cannons, made this a one-day battle; Mexican forces withdrew for Resaca de la Palma after burying their dead. The site appears much as it was during the battle, with cordgrass surrounded by mesquite and cactus.

An ethnographic landscape is a landscape containing a variety of natural and cultural resources that associated people define as heritage resources.

This 397-acre site was constructed between 800-1200 by Caddo Indians, and was the southwestern-most ceremonial center for the Mound Builder culture. The alluvial prairie site was likely selected for agriculture, adjacent forest, and nearby springs into the Neches River. The site currently consists of two temple mounds, a burial mound, and a large portion of the adjacent village area. The Hasinai Caddo left the area in the early 1840s to avoid Anglo-American repression, and currently live in western Oklahoma.

Located in the Chihuahua desert and composed of red rock boulders cracked with holes (huecos) that can hold rainwater for months, this natural oasis has experienced layers of history including the home of Jornada Mogollon culture roughly 900 years ago, and the site of a large cattle ranch. It is now a state park. The locations of these natural tanks are marked with symbols and inscriptions, and more than 200 pictograph panels are located throughout. The 860-acre site continues to hold spiritual importance to Native Americans.

Careful preservation planning should be undertaken to protect the integrity of a cultural landscape and its character-defining features, and should include historical research, inventory, and documentation of existing conditions, and development of a treatment approach. The Secretary of the Interior’s Standards for the Treatment of Historic Properties outline four different treatment approaches including preservation, rehabilitation, restoration, and reconstruction.

A number of factors should be considered prior to determining the most appropriate treatment, including but not limited to the proposed use, level of historic documentation, significance, integrity, costs, and maintenance. Although the treatment approaches are the same for buildings and landscapes, the National Park Service developed separate Guidelines for cultural landscapes that address how the Standards can be met under each of the four approaches. The Guidelines also outline special considerations specific to landscapes such as natural systems, geographical context, and archeological resources.

More information on cultural landscapes can be found on the following websites:

Read a 2015 report on how historic preservation and heritage tourism are making a big economic impact in Texas.