By Brooklyn Pfennig, Intern at the Sam Rayburn House

On summer days, especially those of late July, with its 100-degree weather and blistering sunshine, I love to reminisce and think of the days of March and April when it rains. I find myself on days like those curled up with a blanket and a delightful book, listening to the weather outside and immersing myself in wherever the book takes me. 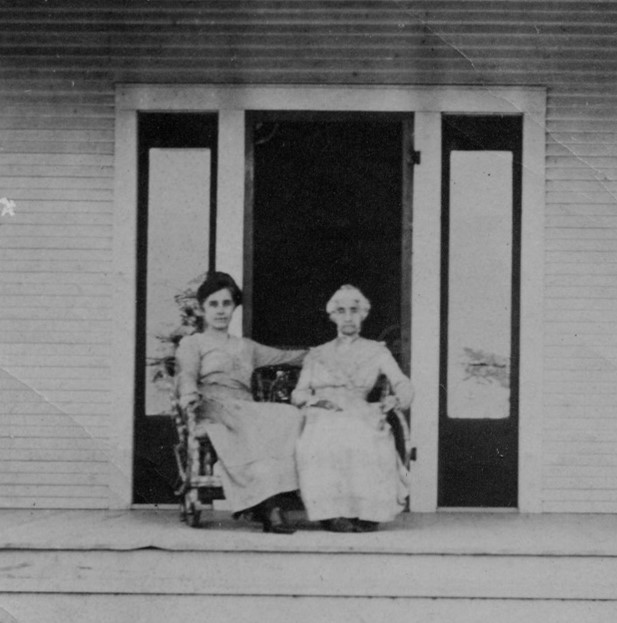 While I have a growing library myself, it pales in comparison to the collection of books the Rayburn family owned. With a matriarch such as Martha Waller Rayburn, who prized herself on being well-read and knowledgeable, it makes sense that her children would follow her to become avid readers. She also taught her husband William Marion Rayburn to read and write, leading him to become an intense reader that tried to read everything under the sun.

Her daughter, Lucinda “Miss Lou” Alice Rayburn, was born on January 14, 1875, the fourth child of the couple. A quick photo comparison between Lucinda and Martha shows that Lucinda was certainly her mother’s child, with a similar facial structure and deep pensive eyes with an overall “Victorian decorum,” as C. Dwight Dorough described it in his book titled “Mr. Sam.” They were both close to Sam Rayburn, with Martha writing to Sam numerous times during his time away and Lucinda managing the home front from Martha’s death in 1927 until her own death in 1956.

During Sam’s time in Washington and after the death of their mother, Lucinda served as Sam’s social hostess. She debuted as his hostess on January 19, 1945. Her name was written on an invitation for a gala honoring presidential electors from Texas and others. She continued in this role until her death in 1956.

Sadly, the Rayburn book collection does not give us a clear idea of who owned or read which books. With up to eight people staying in the house at one time, it is difficult to pinpoint exactly who was the owner of certain books. However, we can have a stroke of luck: finding notes, names, and other information that tells us who the book clearly belonged to. 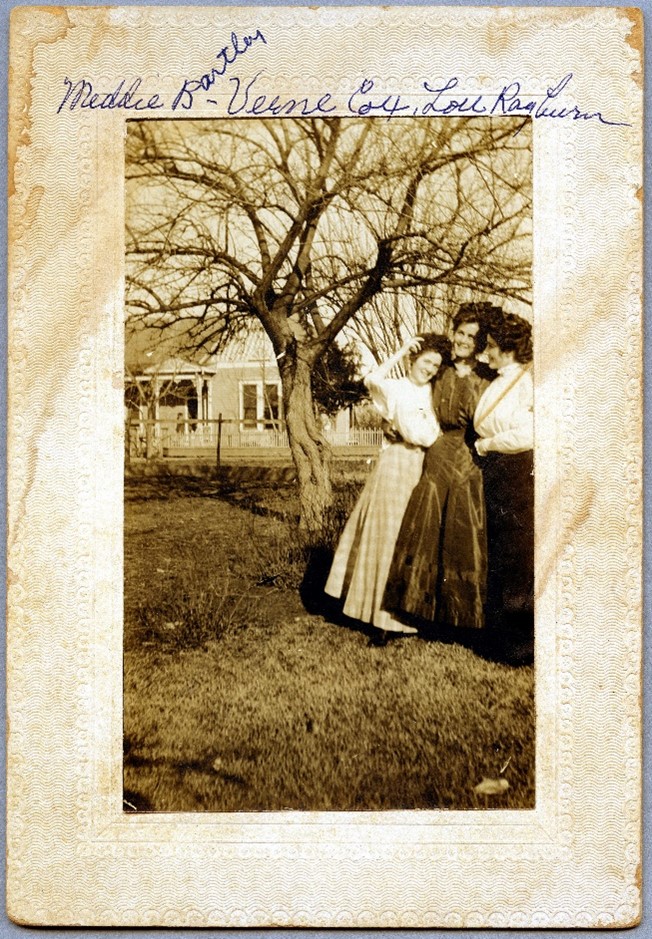 When I started interning at the Sam Rayburn House State Historic Site, I found myself often looking at books from the collection displayed in the Visitor Center. These books contain in their pages insight to the person who owned that book. You can find Medibel Bartley’s inspirational and self-help books, yearbooks, and cookbooks probably used by Miss Lou or Bobbie Phillips, their chef. Sam would read biographies about past political figures, and even the occasional fiction books such as pulp detective and western novels.

One certain book caught my eye in the display case every time I passed by. Possessing a green cover, the book has a woman on the front dressed in what appears to be Victorian fashion. It is titled “Beverly of Graustark,” written by George Barr McCutcheon. The book was a Christmas gift in 1912 to Lucinda Rayburn as told by the inscription inside the front cover: “Miss Lou Rayburn, Dec. 25th, 1912.” The copyright is dated 1904 by Dodd, Mead, and Company, with publication being September of that same year.

Lucinda received this book at the age of 37, turning 38 in only a few weeks. She never married and we do not know the personal details of her love life, assuming she had one. We also do not know who gave this gift to her, whether it was a family member or friend.

“Beverly of Graustark” is one of several books in a series. While McCutcheon is also known for his novel “Brewster’s Millions,” he gained prominent fame from his Graustark series. The first book was simply called “Graustark” and published in 1901 with the remaining five books being published in a span of 26 years following that. It is said that McCutcheon was vexed with his classification as a romantic writer after the release of the series, as he enjoyed playwriting the most.

From what I can gather, it seems the plot was about Beverly, an American socialite and daughter of a Southern congressman who is best friends with Princess Yetive of Graustark. When Princess Yetive must go home because of an escaped dangerous political prisoner, Beverly decides to take a trip there. Beverly soon ends up stranded during her travels and is helped by a group of bandits led by a man named Baldos. Beverly decides to impersonate the princess and arrives at the capital city. Princess Yetive goes along with the impersonation and Beverly appoints Baldos as guardsmen, where all sorts of high jinks and romance ensues. I haven’t read the book yet to be able to give you my full review and summary, but I’ll certainly be adding “Beverly of Graustark” to my reading list. It seems it is full of fantasy, adventure, plot twists, and of course, romance.

A fascinating aspect about “Beverly of Graustark” being a fantasy-romance novel is Martha and William Marion Rayburn’s strictness concerning frivolity and things of that nature. Martha and William were considered “Hard-Shell” Baptists, not even showing open displays of affection to each other or their children. Naturally, they would have both been there to celebrate Christmas with their children and seen Miss Lou’s gift. We do not know who gave this book to Miss Lou or how it was given to her, but it is a fascinating mystery to ponder and theorize about.

No book is immune to the inevitable silver-screen treatment. You’d be interested to know that the trend of turning books into films did not start with “Harry Potter” and “The Hunger Games,” but with classics such as “The Scarlet Letter” which became a motion picture in 1908 as a silent film. Likewise, the first book of McCutcheon’s series, “Graustark,” was turned into a film both in 1915 and 1925. Its literary sequel, “Beverly of Graustark,” was first transcribed to the screen in 1914, only two years after Miss Lou received it as a Christmas present. The stars of the movie were Linda Arvidson and Charles Perley, with it only having a runtime of 57 minutes. An edition of the Denton Record-Chronicle from June 9, 1916, advertises a couple of showings of this version.

Another version of the film came out in 1926, with more prominent actress Marion Davies playing the titular role. This version is still available to watch. However, most of these films are sadly lost and therefore are irretrievable as a result. 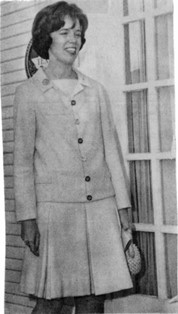 Another interesting tidbit about Miss Lou’s book is the fact that a great-niece, Linda Lowry Cormack, remembered it. She recollected reading it on the staircase in the house, although she did not ask her great-aunt for permission. We do not know the circumstances of her not asking her great-aunt to borrow the book. However, the image of a young girl sneaking a book and reading it in secret recalls my own memories, where I crept away from family gatherings to read my newest “Nancy Drew” or “American Girl” book in peace.

I imagine Miss Lou reading in between chores and errands or on quiet evenings at home. She is described as spending time sitting under the trees in the backyard a few times in biographies written about Mr. Sam, so it is probable that she read outside as well. In Miss Lou’s obituary, it says that along with being a member of the Bonham Garden Club, the First Baptist Church, and an honorary member of the Camp Fire Girls-affiliated Horizon Club, Miss Lou was also a member of the Current Literature Club, which I naturally assume is a book club. 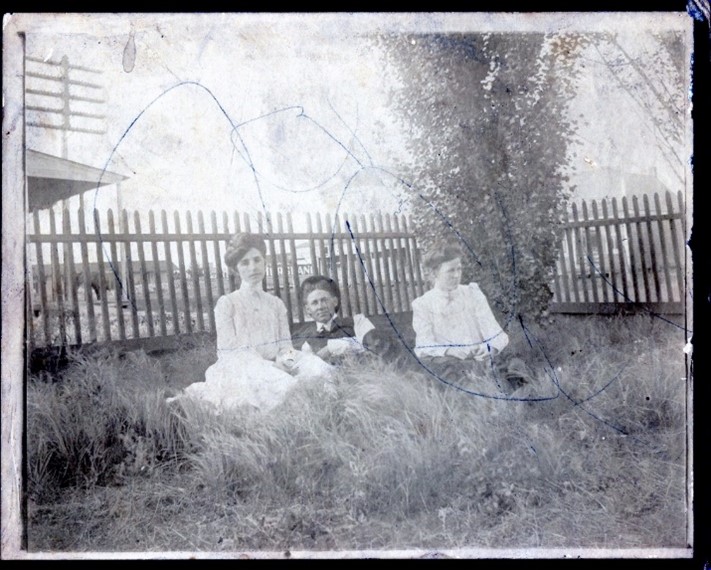 This information adds another potential theory of who the gift-giver could have been. Did Miss Lou read this book as part of the club and borrowed it from someone who later gifted it to her? Could it have been her favorite book that she wanted the other members to read? I can only imagine the conversations had by these women as they discussed their book of the month or what they thought of their newest read. And who knows? Maybe someday, someone will reveal the true mystery of the book-giver and allow us to figure out the circumstances of its gifting on that Christmas Day in 1912. Until then, all we can do for sure is sit and read “Beverly of Graustark” ourselves, imagining what a woman such as Miss Lou would have thought of it.